Mariana Mazzucato and a Mission-Oriented Approach to B.C.’s Economic Recovery 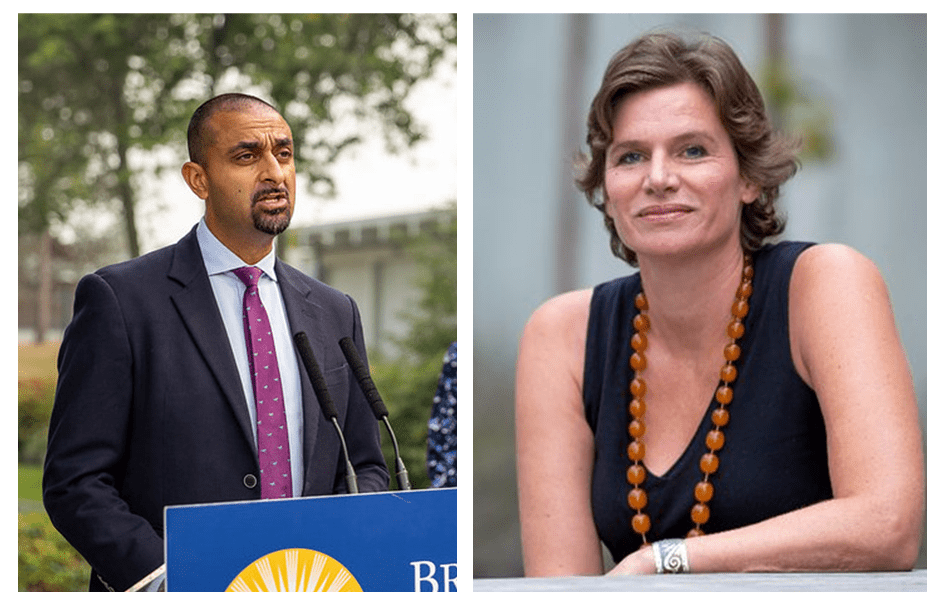 For most of the summer, the B.C. government’s main external priorities have been related to the devastating wildfire season and the evolving dynamics of the COVID-19 pandemic. Behind the scenes, however, B.C.’s Jobs, Economic Recovery and Innovation Minister, Ravi Kahlon, has been working diligently as he prepares an economic plan for release this fall.

To support the development of B.C.’s economic plan, Minister Kahlon brought on Mariana Mazzucato and her team from the University College London’s (UCL) Institute for Innovation and Public Purpose this past June.

Together, Minister Kahlon, Ms. Mazzucato and members of her research team have been facilitating targeted stakeholder engagement through the summer. This engagement will be incorporated into the economic plan when it’s unveiled later this year.

Who is Minister Kahlon and what is his approach to economic recovery? Minister Kahlon has built a reputation for being one of Premier Horgan’s hardest working, most loyal and strategic ministers. He and the Premier have a long history together, as Kahlon worked as Director of Stakeholder Relations for Horgan when he was Leader of the Official Opposition. During the BC NDP minority government (2017 – 2020), Kahlon held several parliamentary secretary roles that allowed him to travel the province and build relationships with a wide variety of community and industry groups.

Following the 2020 election campaign that saw the BC NDP secure a strong majority, Premier Horgan appointed Kahlon as Minister of Jobs, Economic Recovery and Innovation. Given the economic impacts of the pandemic, this is one of the most important roles in cabinet today. It is also one of the most political, as the BC Liberal Opposition has consistently criticized the BC NDP for their approach to the economy.

Kahlon brings the BC NDP’s “people focused” lens to economic recovery and planning. He routinely emphasizes how the pandemic has disproportionately impacted women, Indigenous peoples, youth and racialized workers, and how government’s programs and supports must be targeted to these demographics.

Who is Mariana Mazzucato and what are her views? Mariana Mazzucato is currently one of the world’s most influential economists. Along with her team at the UCL’s Institute for Innovation and Public Purpose, she has served as an advisor to the European Union, the Prime Minister of Italy, the President of South Africa and The World Economic Forum, to name just a few key government organizations.

Mazzucato argues that governments need to play a stronger role in steering the economy towards a triple bottom line approach (people, planet, profit), including a critical role in shaping markets and directing resources to solve urgent issues – or “missions” – like climate change and gender inequity. She believes that governments must also be highly innovative and collaborative in their policy responses, such as re-designing procurement, grants and loans to incentivize experimentation from the bottom up, across multiple sectors and economic actors.

As evidence such a mission-oriented approach can work, Mazzucato often highlights how NASA worked to achieve the moon landing, despite the incredible odds and cost. She notes that hundreds of complex problems had to be solved, but that government was committed to doing what it took. Some solutions worked, and many failed. But all of them came from a purpose-based partnership between government and business. As a more recent example of such a mission, Mazzucato notes our current Climate Emergency is a fundamental challenge for everyone, but particularly for countries like Canada that are economically reliant on petroleum extraction or production. As more jurisdictions continue to pursue decarbonization due to higher levels of public support, it will threaten jobs, export revenues and industrial innovation across petroleum dominated economies, unless government is willing to invest in new sources of energy and new directions of growth. Green tech is an obvious place to look.

In making the shift away from fossil fuels, Mazzucato argues that government should take an active role investing and coordinating the economy, including “green” industrial banks, establishing new energy companies and using the power of public procurement to spur green development and innovation. She argues grants, loans and other financial incentives should also be prioritized for companies willing to step up and help the government meet its goals.

What can we expect to see in B.C.’s economic plan this fall?

As mentioned above, Minister Kahlon, Mazzucato and her team have been holding stakeholder engagement sessions throughout the summer. Rather than the traditional sector-based tables, this engagement has been organized as “mixing and matching,” with different groups coming together to share their feedback and ideas on the future of B.C.’s economy.

As part of these sessions, stakeholders are being asked to share their perspectives on B.C.’s values and priorities, how the plan can build on existing strengths and competitive advantages, ways to support market certainty and how government can best make investments over the next decade. Additionally, government is seeking feedback on how the economic plan can align with the 2019 Economic Framework, developed by previous Deputy Minister to the Premier, Don Wright.

Given the clear policy alignment between Mazzucato and the political priorities of Minister Kahlon and the B.C. NDP, we can expect B.C.’s economic plan to include a strong and activist role for the government across all sectors of the provincial economy. When her appointment was announced, Mazzucato noted that British Columbia “has the opportunity to shape a different kind of economy – one that is sustainable, inclusive, resilient and oriented around solving problems that matter to people and planet.”

One place we know that Mazzucato will have a big impact is on InBC, an upcoming $500 million investment fund aimed at providing “patient capital” to small and medium-sized B.C. businesses with high growth potential. In describing the fund, Mazzucato said it needs to be guided by “clear missions” which suggests it will be tied to NDP priorities like climate change, Indigenous reconciliation and gender equity. Companies with innovative approaches to these key issues will likely be a priority for InBC’s Chief Investment Officer, who is by law required to make funding decisions independent of government and board interference.

We can also expect Mazzucato to have a big influence on climate and environmental policy, including a major push into green tech and a continued shift away from fossil fuels. This will likely include recommendations on who can receive government grants and loans, and strong guidance for “mission-oriented” government procurement. One example we can already look to is the recently announced B.C. Centre for Innovation and Clean Energy, a new partnership between the province, Shell Canada and the federal government that aims to de-carbonize the economy and scale up clean energy solutions.

There is also the potential for Mazzucato to recommend a new “green” investment bank, which could provide the government with another pathway to invest in companies willing to rise to the challenges of climate change and environmental sustainability.

Ultimately, Mazzucato’s work with the BC NDP government has raised expectations, within the party, caucus and amongst stakeholders, for a more activist approach to governance. That said, it remains to be seen whether her mission-oriented approach will even be accepted by Cabinet, which has often taken a more “hands-off” approach to managing the economy. Another dynamic to watch is whether the federal Liberals or NDP decide to borrow any of Mazzucato’s ideas for their platforms in the upcoming election campaign.

Over the coming days, Global will continue to monitor the ongoing consultations with Minister Kahlon, Ms. Mazzucato and her team. And when B.C.’s economic plan is released this fall, we look forward to providing a comprehensive update to all of our clients.