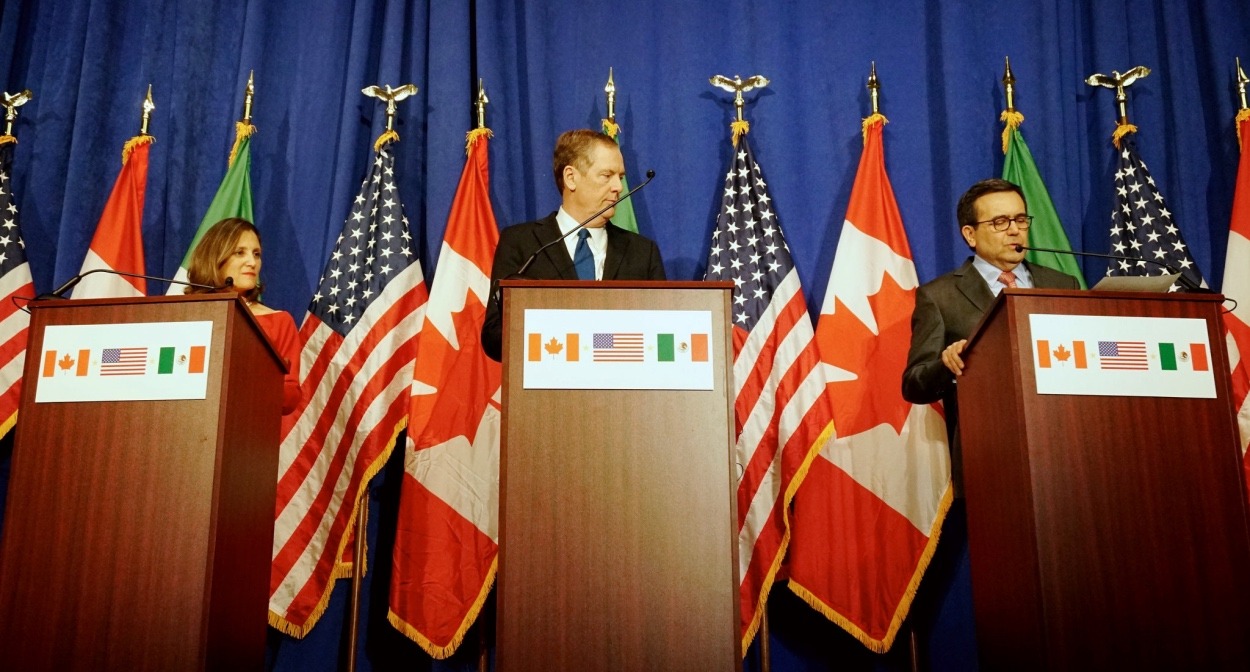 After months of negotiations, the United States, Canada, and Mexico have come to a trade agreement. NAFTA is no longer, and USMCA has taken its place.

The announcement follows an intense whirlwind weekend of negotiations where all three parties rushed to reach agreement by a self-imposed deadline of October 1. U.S. Congress requires 60 days to review the final text of a trade agreement and an October 1 deadline would ensure that a new deal was reached before current Mexican President Enrique Pena Nieto leaves office on December 1.

For the past several months, trade talks between Canada and the U.S. in particular have been held up by disagreement in a number of areas: rules of origin for auto parts, dairy market access, dispute settlement, a sunset clause, and Canadian cultural exemptions. UMSCA features concessions from both parties on all issues.

Key features of the USMCA

With respect to autos, Canada has agreed to implement a quota on exports, but with a ceiling far higher than what Canada currently sends to the American market. This effectively represents an exemption to stricter measures the U.S. is considering on auto imports from elsewhere.

Regarding dairy, Canada has agreed to provide American farmers with greater access to the Canadian system, representing approximately 3.6% of Canada’s current dairy market. Canada has also agreed to eliminate its controversial “Class 7” pricing regime for certain milk products. Canada’s dairy market has been the subject of intense criticism from President Trump, and this represents a major concession from Canadian negotiators. It is still unclear how this will land politically, especially in Quebec where the dairy market is particularly prominent (and where a provincial election was just held). It’s important to note that Chrystia Freeland stated that Canada intends to compensate dairy farmers for the losses they will arguably sustain given today’s agreement, and that the government will strike an industry working group focused on measures to maintain the vitality of Canada’s dairy industry.

On the subject of dispute settlement, USMCA preserves key provisions from Chapter 19 of the original agreement. Eliminating Chapter 19 was a top priority for U.S. Trade Representative Robert Lighthizer, who has been a longtime critic of the measure. However, dispute settlement has been a “line in the sand” for Canada since the negotiation of the original Canada-U.S. Free Trade Agreement in 1987, and its preservation in USMCA is regarded as a major win.

The U.S. has also agreed to revise its controversial proposal to implement a five-year sunset clause. Instead, a “joint-review” process has been put into place, where the three parties will meet in six years to then determine if the agreement will remain in place for another 16-year term. Canada has also preserved cultural exemptions that were featured in NAFTA.

Other new provisions in USMCA include an increase in data exclusivity for new biologic drugs – from 8 years to 10 years. A new chapter on competitiveness has also been added, which will result in the development of a three-party committee that will meet yearly to “discuss and develop cooperative activities in support of a strong economic environment that incentivizes production and in North America”. USMCA also eliminates the specific energy chapter that was in NAFTA and instead replaces it with a chapter that recognizes Mexico’s unique energy market. More information will be available in the coming days and weeks as trade experts have time to review the fine print.

There is still a long road ahead before USMCA becomes law. Consultations with the private sector are expected, along with a full review and ratification process by each respective legislative body in each country.

Barring unforeseen circumstances, the three parties will sign the agreement by late November, at which point they will begin their own domestic ratification processes. In Canada, this will require the passing of implementing legislation in the House of Commons, similar to what was done with the Comprehensive Economic and Trade Agreement with Europe. Meanwhile, Mexico must ratify through a similar process in its Senate, while in the U.S., Congressional committees will conduct hearings reviewing the terms of the agreement prior to a vote in Congress.

In short, a finalized and ratified USMCA will not likely occur until well into 2019.

What about steel and aluminum?

Despite earlier reports stating that the U.S. would lift its tariffs on Canadian steel and aluminum if a new trade agreement was reached, it appears that these tariffs will remain in place for the time being. Included in an Annex side letter to the USMCA, the U.S. has proposed draft terms to commence with negotiations to do away with Section 232 tariffs. However, at this time there is no indication when they might commence these negotiations. The continuation of the tariffs was affirmed by U.S. Commerce Secretary Wilbur Ross, who stated that security concerns related to U.S. steel imports will persist and that there is no timeline for removing them.