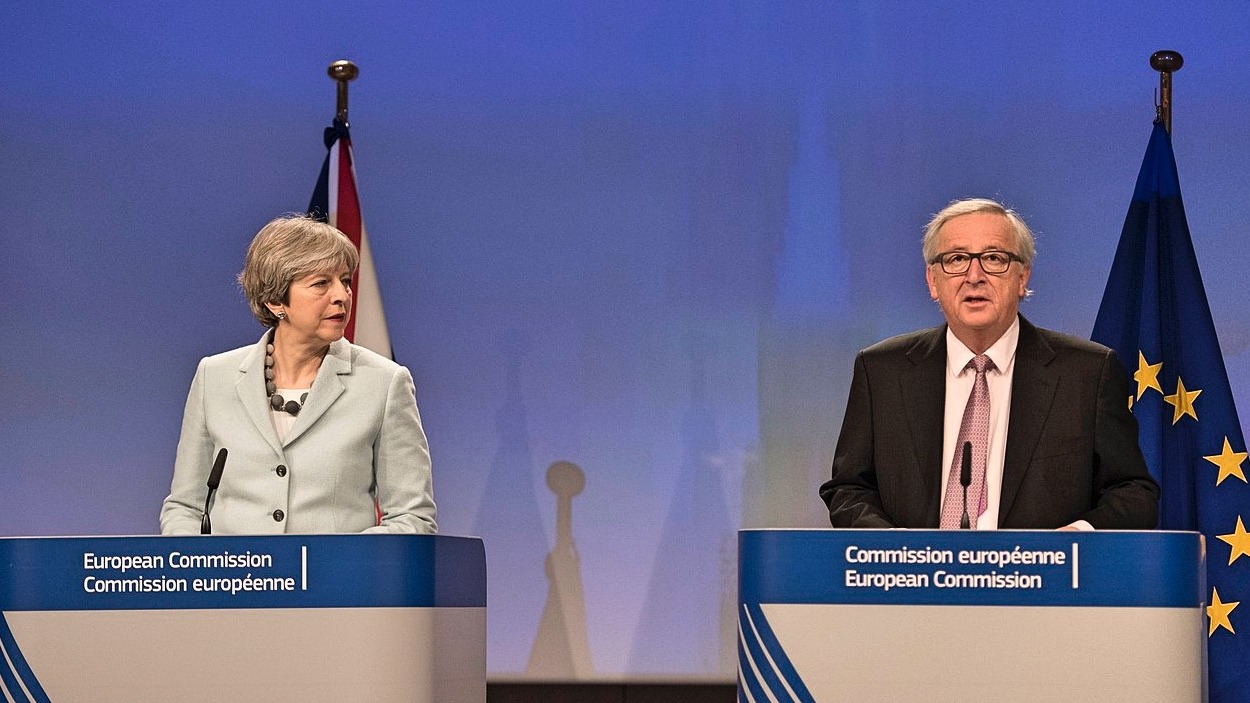 For Brexit, this autumn is dubbed “The Final Push” in Brussels. But considering the painful process negotiations have been to date, how likely is it that Brexit will happen?

For Brexit, this autumn is dubbed “The Final Push” in Brussels. By mid-November, according to the European Commission, a legally-binding withdrawal agreement and an accompanying, though not legally binding, political declaration outlining how the EU and UK envisage their post-Brexit relationship, have to be signed off by both sides.

Considering the painful process Brexit negotiations have been to date, how likely is that to happen?

Reports are that there is a slow but spreading sense of panic EU-wide across business and industry. A no-deal scenario would be costly for Europe as well as for the UK. Those dependent on production lines, imports and exports fear the Brexit deal deadline won’t be met this autumn thanks to turbulent UK domestic politics as well as the clashing demands of both sides in negotiations.

Away from business’s understandable concern and there is a rather different impression. According to the BBC “The EU 27 (member states) have little appetite to make things difficult for the UK this autumn. They have little appetite for broken relations with the UK. They want a deal.”

Firstly, because a no-deal scenario would cost European businesses dearly, at least in the short-term as outlined above, and secondly – and even more importantly in the minds of EU politicians – because they look around at the volatile geopolitical situation worldwide and want to keep their UK friends close.

The main sticking point to completing the withdrawal agreement remains the so-called backstop on the Irish border – ensuring that, whatever happens in the EU and UK’s future relationship, no new hard border would be built between Northern Ireland and the Republic of Ireland.

It’s a burning hot political potato for the British prime minister, as is finalizing a declaration on the EU-UK future relationship.

Will it herald a United Kingdom that has taken back control or usher in a Brexit in Name Only?

The EU’s chief Brexit negotiator, Michel Barnier, has recently said it is “realistic” to believe that a Brexit deal can be agreed between the UK and the EU within the next two months.

British Prime Minister Theresa May presented her case to her EU counterparts during a meeting in Salzburg on September 19th, before the other 27 leaders discussed how to respond among themselves. The plan for a special Brexit deal summit in November is likely to be unveiled during the course of the Salzburg gathering.

Discussions on the state of play in the talks took place over a two-hour lunch in Salzburg, at which leaders were likely to instruct the EU’s chief negotiator to work with the best of British Prime Minister Theresa May’s Chequers proposals.

The EU27 is expected to insist on a resolution over the issue of avoiding a hard border on the island of Ireland is achieved by the time of a leaders’ summit in October in order for a deal to be possible.

However, the special summit – likely to be held on 13 November – would then allow EU heads of state and government to wrap up the terms of a political declaration on a future deal on trade, security, aviation and fisheries, among other issues.

The Chequers plan gets a thumbs down

Michel Barnier has dismissed Theresa May’s so-called Chequers plan, which was backed by her cabinet when it met at the PM’s country residence in July, as incoherent and unpractical. Giving Britain what no other country has got is and always has been a non-starter for Brussels. For the European Union, trade integration must be commensurate with economic integration, and this implies continual regulatory convergence. This is the reason why no country in the world enjoys access to the single market without having to comply with single market rules. Britain isn’t going to be the first.

Mr. Barnier is far from alone in Europe in rejecting large chunks of Theresa May’s Chequers Plan as unworkable, despite the EU wanting to tread carefully to avoid further damaging her authority just as she had finally produced what the EU had long been asking for – a clear British position – and when she is in such political difficulty at home over Brexit.

The novelty in May’s approach is to suggest separating goods and services. Under the Chequers plan, Britain would remain part of the EU single markets for goods, while it would exit the single market for services. Regulatory convergence would be ensured through a ‘common rulebook for goods’. As for services rules, Britain would be free to diverge. Crucially, this would allow free movement of people to be abolished – one of the four indivisible freedoms guaranteed by the EU single market.

But as Barnier pointed out this week, there is no such thing as a single market for goods and another for services. The depth of economic and political integration within Europe has resulted in a large body of regulation which simply cannot be disentangled.

There is another reason why the Commission will not waiver on this ‘all or nothing’ line. ‘All or nothing’ as a principle is the glue that holds the single market together. No EU member state can choose to deviate from some of the rules, as this would be a clear path to the complete unravelling of the whole project.

The EU, as one the driving forces in the world for free trade, has gone further and included MFN rules in its own free trade agreements. Signatories of such agreements, like Japan or Canada, have therefore gained the right to extend their access to the EU market up to the treatment granted to the nation most favoured by the EU in other free trade agreements.

This means that, should the EU give the UK better treatment than it currently gives to Canada and Japan, the EU would effectively have to adjust its treatment for Canada and Japan so that they would not be discriminated against. In other words, opening up to the UK means the EU would potentially have to open up to many other trade partners. Business leaders have agreed with Michel Barnier that “unravelling” the single market “just” to do business with the UK post-Brexit makes little long-term economic sense.

The only option to avoid this knock-on effect would be to keep the UK within the entire single market – or agree a trade deal equivalent to the EU-Japan or the EU-Canada FTAs – which would mean reducing trade relations with all of the economic ramifications and would leave the Irish border unresolved.

Catastrophic Split of the Tory Party?

It’s not only Michel Barnier who has thrown cold water on the Prime Ministers Brexit strategy. Up to 80 Tory MPs are prepared to vote against the Chequers plan, a former Brexit minister has warned. The cabinet-backed Chequers plan also led to the resignations of then-Brexit Secretary David Davis and the former Foreign Secretary Boris Johnson.

Conservative MP Steve Baker told the BBC the PM’s blueprint for future relations with the EU had alienated both Leavers and Remainers. He warned of a “catastrophic split” if his party was not able to unite around a different, more flexible arrangement.

Mr. Baker told the Press Association that the lack of support for Mrs. May’s plan among Tory MPs left her with a “massive problem” in the run-up to next month’s Conservative conference. If the government tried to push through a Brexit deal through, on the back of Labour votes, he said the Tory Party “would suffer the catastrophic split which thus far we have managed to avoid”.

The Tory reaction to the Chequers plan means that May is boxed in. So while neither the UK government nor the EU 27 want ‘no deal’, Chequers isn’t going to happen in its present form. This revives the possibility of a Canada-style free trade agreement.

The EU has long said that it is prepared for a tariff-free, quota-free trade deal with the UK. This would please Brexiteers, since it would see the UK unambiguously leave the single market, the customs union and the jurisdiction of the European Court of Justice. As Jacob Rees-Mogg mischievously pointed out after a recent meeting with Barnier, Eurosceptics and the EU’s chief negotiator agree with each other more than the British government does.

There are ways that May could sell a Canada-style deal to her party and the country. She could say that she tried to negotiate a closer economic relationship with the EU than a simple free trade deal, but that was not possible without making concessions which would have compromised the referendum result. She could argue that the choice was now between this agreement and the chaos of no deal, and that there was no time left to negotiate anything else. Seeing as the government doesn’t intend to introduce the withdrawal act until January next year, this will be part of May’s argument whatever agreement is reached.

But a Canada-style arrangement runs into two problems straight away. The first, and most important, is the so-called backstop – a deal would quickly create checks on trade between Northern Ireland and the rest of the UK, something the Democratic Unionist Party (upon whom the Tories are reliant for their majority) would almost certainly oppose.

The other reason is what it would mean for those UK industries with complex, Europe-wide supply chains. Even if the Irish border were not an issue, there would still be many figures in the cabinet who would argue for a closer economic relationship with the EU than a Canada-style deal would allow for.

May is no longer able to make many more concessions. She has already lost two senior ministers over the Chequers proposals. As another Tory cautions: ‘If anyone tells you they are sure of how all this is going to play out, they are lying.’

Are there any other options?

Leave without a deal

Stay in the EU