Leaders Square off in Final Debate

All three party leaders spent time in the GTA leading up to and following Sunday’s final Leaders Debate at CBC studios in downtown Toronto. With mere days left until Ontarians cast their ballots, all three party leaders are preparing their final push in what has become an increasingly bitter and close campaign.

The Maclean’s Leader tracker has kept track of the leaders’ tours, and exactly how far each of them has travelled in their bid to form the next government: 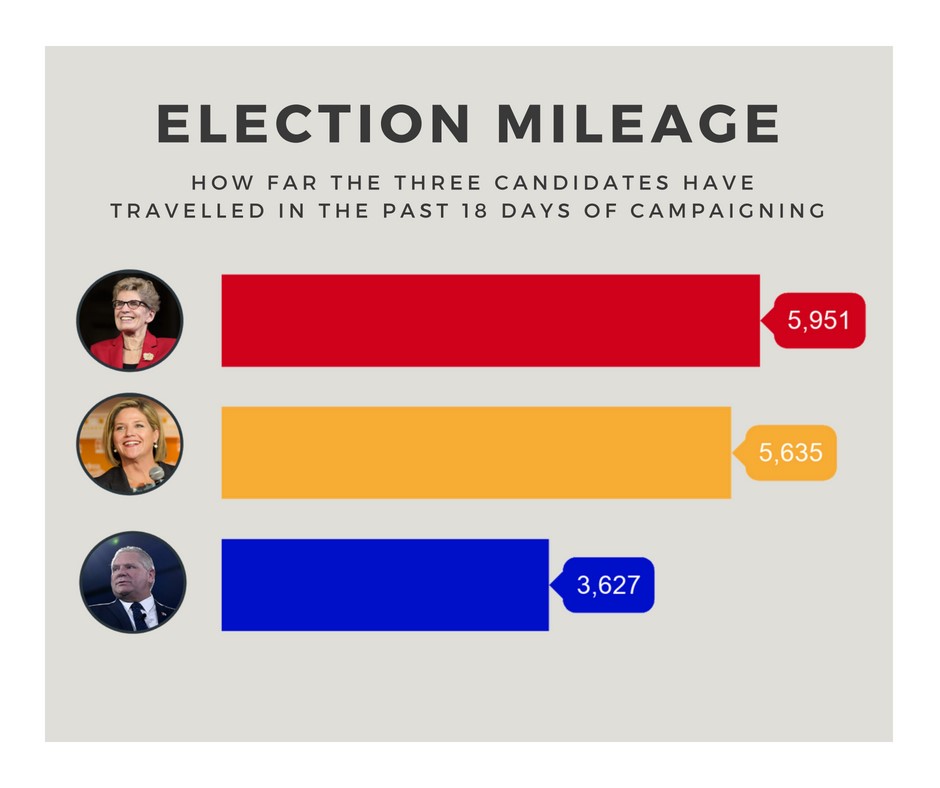 Things get heated as leaders square off in final debate

Sunday’s final leaders debate was sharp, testy and at times, downright divisive. The three leaders sparred over a wide range of topics, from public ownership and executive compensation at Hydro One to child care as they entered the final stretch of the election campaign. While all three leaders took shots at one another while maintaining that only they and their team are fit to govern, pundits agreed that Wynne’s “sorry not sorry” attitude may have won the day. However, with polls showing the Liberals firmly in third place, Horwath became the focal point for criticism from all sides;  Ford simply stuck to the same narrative he has had all campaign, talking about saving taxpayer’s money and weaving in anecdotes and humorous one-liners from time to time.

The biggest single issues facing all three would-be Premiers as the election campaign enters the home stretch are:

The Green Party was not invited to participate in the televised Leaders Debates, keeping in tradition with invitations being extended to parties with seats in the Legislature and full provincial campaigns. 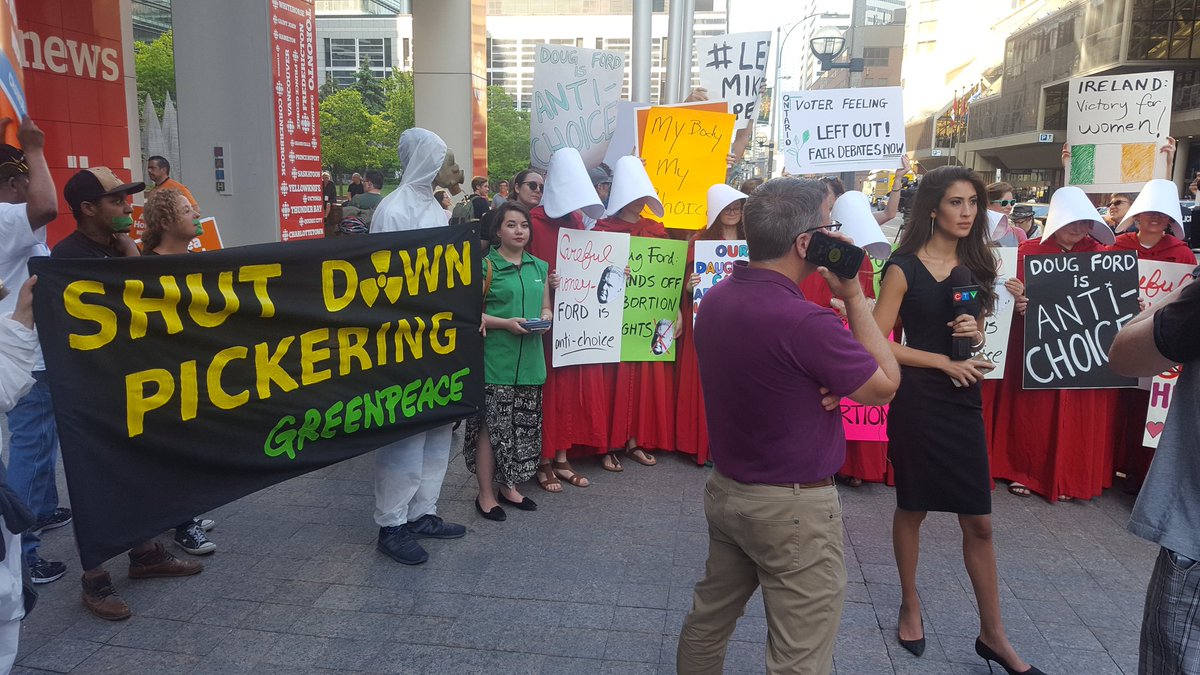 During Sunday night’s debate, Liberal Leader Kathleen Wynne took the opportunity to debut her latest campaign catchphrase: “Sorry, not sorry.” In an attempt to combat her low likeability numbers, Wynne bluntly told voters that although she is sorry that more people do not like her, she is not sorry for everything her government has accomplished in its 5 years in power. Also featured in an online media campaign immediately following the debate, Wynne’s ‘Sorry, not sorry’ messaging made specific reference to Liberal initiatives like the minimum wage, free tuition and climate change, as well as her economic development record. While many praised Wynne’s campaign performance and unapologetic pivot, it remains to be seen whether or not these moves will garner more support for the third-place Liberals. Despite the prepared messaging around her, Wynne appeared unprepared to answer why voters should choose her even if they do not like her.

On Monday, Liberal Leader Kathleen Wynne claimed that, should her party be re-elected, they would put forth legislation mandating striking York University workers back to work. As part of a larger messaging campaign positioning Wynne and the Liberals as pragmatists in opposition to the NDP’s idealism, Wynne claimed that although she still supports the collective bargaining process, she must consider those who may be hurt during the trying striking period. The decision comes as the Liberal’s are looking to not only differentiate themselves from Doug Ford’s PC party, but also Horwath’s NDP. The move marks a turn back to the center for the Liberals, a position which allows them to point out the more radical elements in both would-be replacements. 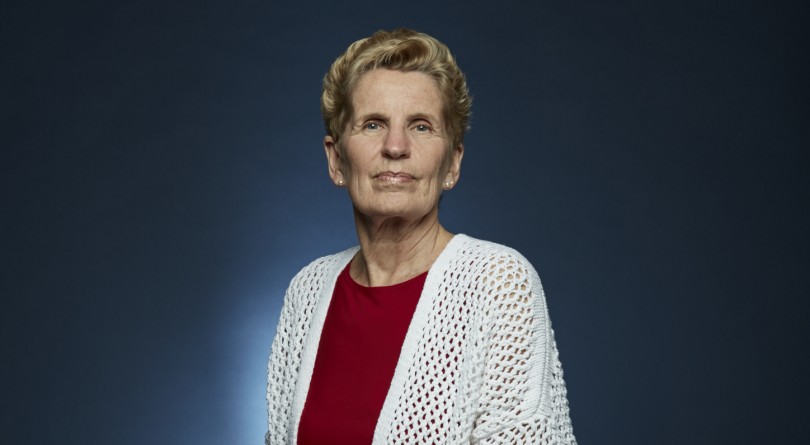 Yesterday, Doug Ford held a press conference in Newmarket with a number of candidates to showcase to voters that if elected on June 7, the PCs are ready to lead. Ford jumped on the opportunity to contrast his front bench to the NDPs “radical” candidate roster as described by the PCs in recent days. “We have all-stars across the province” quoted Doug Ford, who sat at the head of the table with Caroline Mulroney and Christine Elliott seated on either side of him. Also at the table were Ajax candidate Rod Phillips, former interim leader Vic Fedeli, finance critic Lisa MacLeod, candidate for Pickering-Uxbridge Peter Bethlenfalvy, former Toronto Councillor Raymond Cho, former federal cabinet Minister Greg Rickford and St. Catharines candidate Sandie Bellows.

While that team makes up a significant part of the Tory team, they would not be the only candidates being considered for a Ford cabinet as some key caucus members were missing; this includes energy critic Todd Smith, infrastructure critic Sylvia Jones, economic development critic Monte McNaughton and Deputy Leader Steve Clark. Ford’s ability to govern was also boosted through endorsements from current Conservative Leader Andrew Scheer, and former Conservative Prime Minister Stephen Harper.

When asked who Horwath would name to the NDP cabinet, including potential finance Ministers, she responded that if her party was chosen to form government “that would be a problem I’ll deal with at that point.”

PCs pledge to bring back ‘buck-a-beer’

On Saturday, the PCs announced that that they will reduce the minimum price for the sale of beer in the province to $1.00 plus deposit per bottle to encourage competition. To implement the ‘buck a beer’ policy, the PCs will have to amend regulations in the Liquor Control Act to allow for a minimum price of $24 for 24 bottles of beer plus the deposit. Ford has taken the idea from former leader Tim Hudak, who toyed with it in 2011, though Ford is hoping it will be more successful a second time around.

The PCs also plan to expand the sale of beer and wine to corner stores. 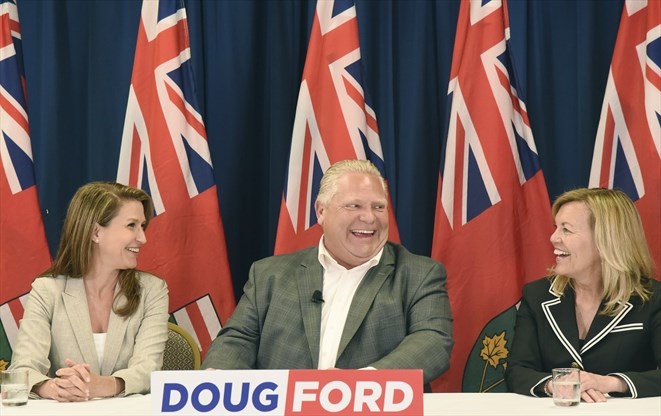 From the top of the polls: have the NDP peaked too soon?

With just over a week left in the campaign and the recent NDP surge in the polls, can Horwath maintain the momentum? Last week, an Ipsos poll has the NDP winning a majority with 48%, PCs with 35% and Wynne with 18%. This was a milestone for the NDP in the campaign but the true question is if she can maintain these numbers over the next week heading into the polls on June 7. Following Sunday night’s debate, her numbers slipped slightly while the PCs increased. Horwath’s candidates are not helping the situation either with recent attention around negative Facebook posts, protesting police and comments around implementing a $150 carbon tax.

Today, the PCs have edged ahead in a new Ipsos poll with 37% while the NDP are at 34%. The Liberals numbers are increasing due to a strong showing at the debate and new “sorry, not sorry” ads from leader Kathleen Wynne. The Liberals have increased to 22%. It is worth noting that Andrea Horwath has amassed a behind the scenes team of experienced campaigners from Manitoba, British Columbia, Alberta, and Ottawa. The influx of experienced NDP campaigners from outside Ontario includes Michael Balagus, Marla DiCandia, and Marie Della Mattia, just to name a few.

The challenge now is to sustain the momentum through the final 9 days of the campaign and cement the path to victory, something the talented campaign team are capable of doing. 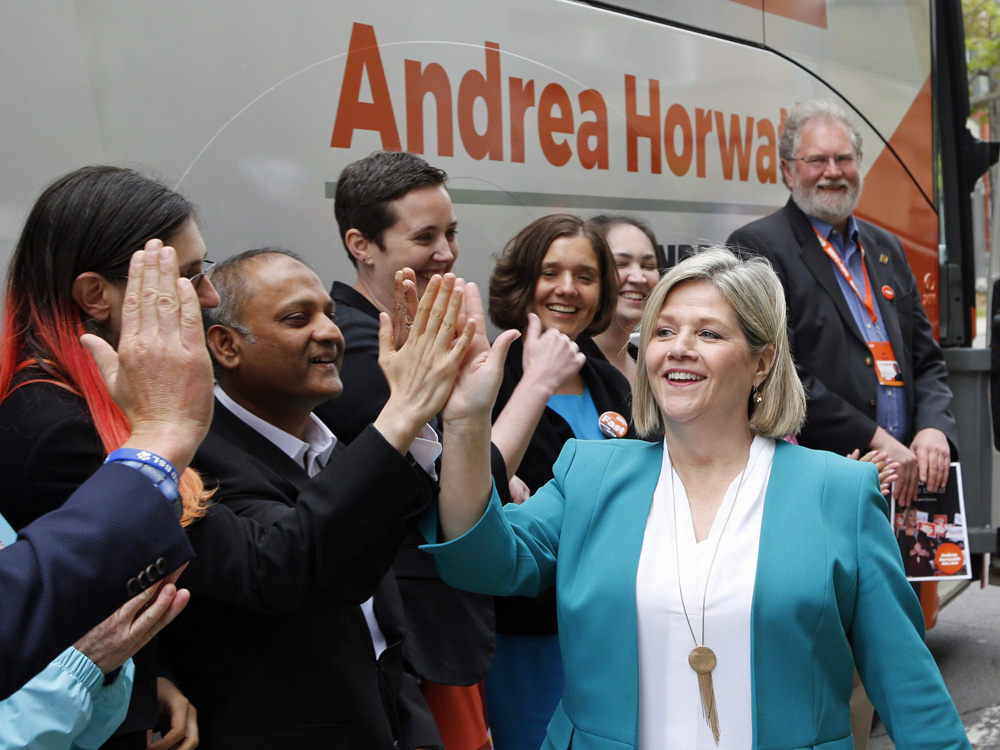