Beyond the Ballot VIDEO: Rocco Rossi

This week on Beyond the Ballot, Rocco Rossi of the Ontario Chamber of Commerce sat down with Tom Clark to talk about Ontario’s business community and the upcoming election.

With two weeks to go until election day on June 7th all campaigns are fighting for voter support and positions in the polls. In this week’s edition of Beyond the Ballot, we look at the NDP’s increased coverage, Ford’s promise to expand alcohol sales, disagreement between parties on the continued operation of Pickering nuclear facility and the ongoing PC nomination debacle.

Premier Kathleen Wynne took a rare day off on Saturday and then spent the rest of the holiday weekend out campaigning with a number of stops at restaurants in key ridings to tout the Liberals minimum wage increases. Tonight, Wynne will hold her first rally of the campaign in Scarborough with local candidates.

PC Leader Doug Ford spent time north of Toronto over part of the holiday weekend campaigning on expansion of alcohol sales in PC ridings and with former leadership candidate Caroline Mulroney in her riding. This week Ford campaigned in southwestern Ontario and will end the day with a rally in Hamilton Centre, the NDP Leader’s riding.  Earlier today Ford received a significant endorsement from former Mayor of Mississauga Hazel McCallion.

NDP Leader Andrea Horwath traveled to northern Ontario for the first part of the long weekend, stopping in Kenora and Thunder Bay ridings which have been historically NDP held. Horwath then spent time in eastern Ontario before an event in Brampton Centre with special guest federal NDP leader Jagmeet Singh – Singh is the only federal leader to make a campaign appearance so far. This week Horwath made stops around the GTA and held a youth townhall in Toronto. 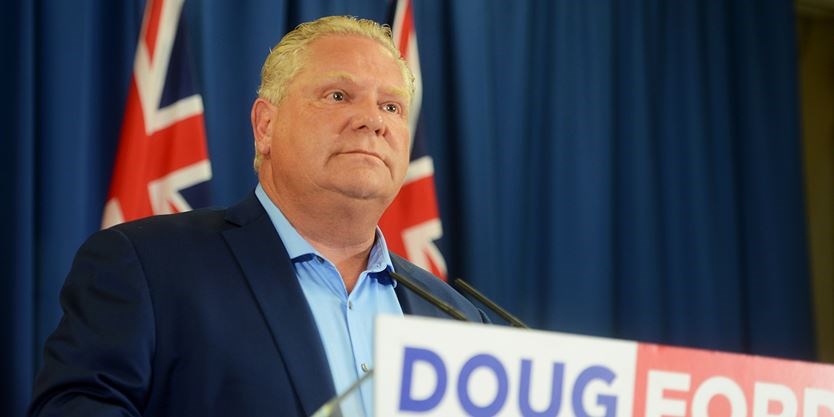 At the beginning of this week, OPG’s Pickering Nuclear Generating Facility became a political football between PC leader Doug Ford and NDP leader Andrea Horwath. Ontario Clean Air Alliance, the group who credits themselves for the phase out of coal in Ontario, surveyed each leader on several issues related to the environment, climate change and energy. One question asked each leader’s position of keeping Pickering Nuclear Generating Facility in operation and extending their license to 2024. The NDP and Green Party answered “no” indicating they would close the plan after it’s lease expires in August.

Doug Ford was quick to jump on the issue holding a press conference in Pickering on Tuesday afternoon to restate his commitment to Pickering, keeping jobs in the Durham region and calling on Andrea Horwath “to come on down to Durham to stand in front of the thousands of workers she intends to lay off.” Though the NDP platform doesn’t specifically mention any plans to close Pickering, it does outline the need to address oversupply in the province’s energy mix. Horwath responded to the issue at a campaign event in Toronto that if elected, the NDP would “begin the decommissioning process immediately” citing these plants go on “forever and ever and ever”.

Both the Liberals and the PCs have committed to extending Pickering Nuclear Generating Facility until 2024. 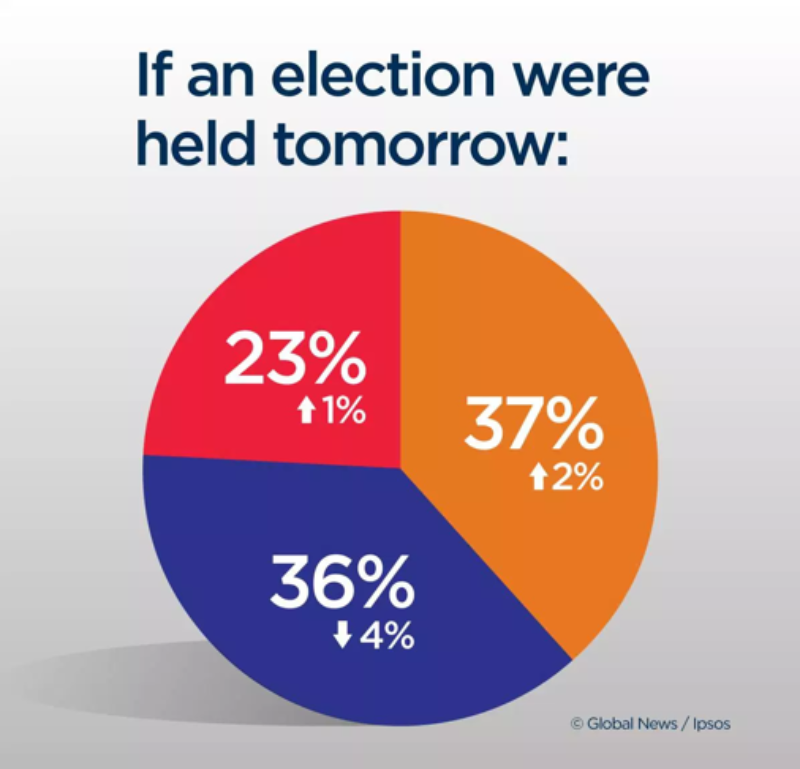 “I am not Bob Rae. And this is not 1990…,” declared Andrea Horwath, signaling an assertive departure from the party’s checkered past. Notwithstanding an embarrassing $1.4 billion costing error in her platform, the NDP leader has created momentum in this past week. An Ipsos poll from this week puts the NDP ahead of the PCs, by 1%; the party’s ascent also coincides with the PC’s slight decline. Horwath’s 30% trust rating, while remarkably low, is the highest among the three party leaders, suggesting broad and intense public dissatisfaction with all three candidates.

If Horwath’s surge in the polls continues it may be enough to swing some traditional Liberal ridings to NDP. Her efforts—and the passage of 28 years—may also finally extricate the party from Rae’s stigmatic legacy. 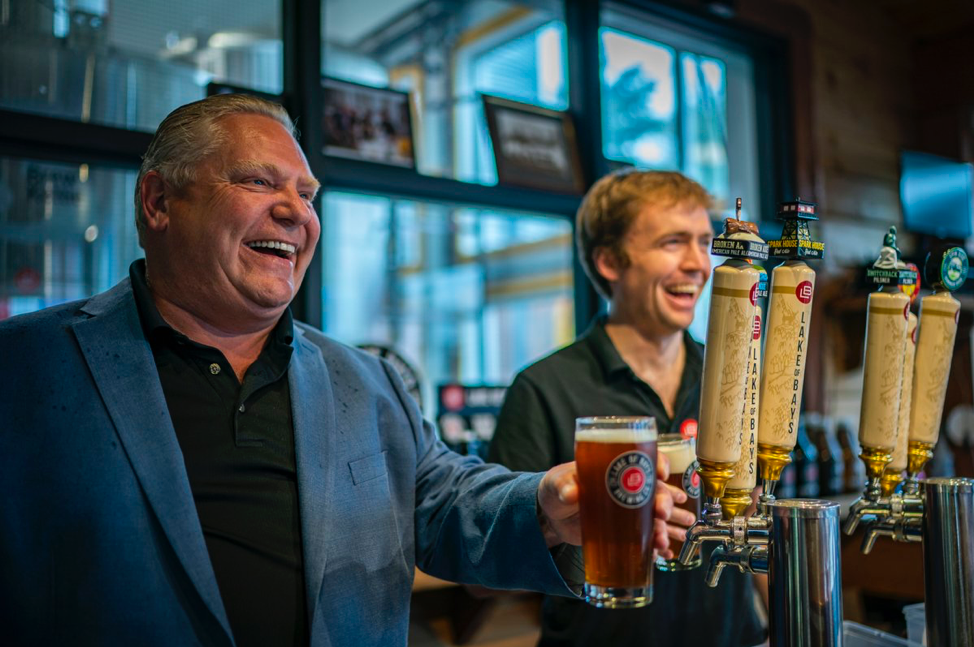 Late last week, PC Leader Doug Ford sparked a conversation about Ontario’s liquor system with his announcement that he would expand sales of beer and wine into corner stores. Ford cited that alcohol reform is something long desired by the people of Ontario, and that all new points of sale will be regulated by the Alcohol and Gaming Commission of Ontario (AGCO) in a way similar to how the LCBO and the Beer Store currently operate. While Ford praised the Alberta model of alcohol retail as ideal, he did note that, if elected, he would maintain the current LCBO model in addition to his proposed changes.

Liberal Leader Kathleen Wynne went on the offensive in a press conference with Mothers Against Drunk Driving CEO Andrew Murie to contradict Ford’s promises. Citing his proposal as ‘reckless’, Wynne mused about an Ontario under a Ford government in which alcohol is sold next to candy bars, and how this would serve to increase access to youth and spark an increase in drunk driving. Though Murie made sure to clarify that his appearance at the press conference does not constitute an endorsement for the Liberals, he warned that Ford’s ‘major step backwards’ could also serve as a predictor for the PC plans for the province’s cannabis retail regime.

For her part, NDP Leader Andrea Horwath responded to the back-and-forth exchange between Ford and Wynne by decrying Ford’s proposal and pledging her support for Ontario’s current system. However, a NDP Party spokesperson told CTV News that a decision on the expansion of Ontario’s alcohol regime cannot be made before the election. 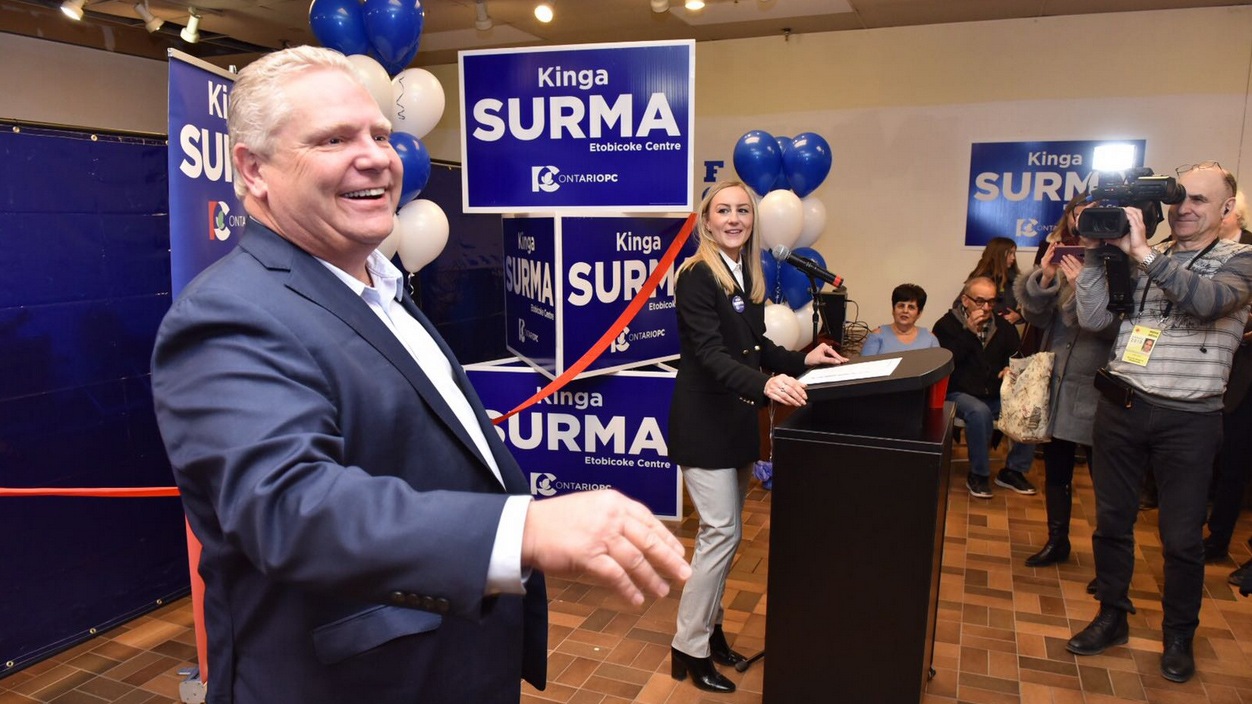 Controversies around nomination races continue to plague the PCs

The issues started last week when Simmer Sandhu, former PC candidate for Brampton East, resigned his candidacy after he was linked to a data breach at the 407 ETR toll highway, which saw the personal information of 60,000 drivers compromised. Both the Liberals and NDP have called for an Ontario Provincial Police probe into the information theft, which both parties claim could be potentially used for political purposes. Sandhu has denied having any role in the alleged theft, but was replaced by Sudeep Verma.

Ford has maintained that if evidence of wrongdoing by any candidate surfaces, he would take “immediate action” to address the issues, and noted that many of the controversial nominations took place while Patrick Brown was leading the party. Ford also pledged to have the party look into whether the information may have been used by candidates to win nomination races.

Nominations continued to distract the PCs through the week. At their Toronto campaign headquarters this morning, the Liberals released an audio recording that appeared to show Ford and Etobicoke-Centre then-nomination candidate Kinga Surma signing people up for party memberships. Ford was quoted as saying “it won’t cost ya anything” to sign up, and that constituents could simply fill their contact information, sign their name and leave the rest of the membership form blank – something that raised flags for Liberal campaign co-chair Deb Matthews.

Matthews alleges the tape proves that Ford was directly involved in selling “bogus memberships” – something that contradicts Ford’s pledge to crackdown on shady nomination practices.

Ford responded to the allegations on Thursday morning, claiming that the Liberal campaign was simply trying to “change the channel” and distract voters from the issues at play. He did not deny the recording, but promised that he has never paid for another person’s membership. Ford also claimed that the events took place nearly two years ago, and that the Etobicoke-Centre nomination went through a full internal review by the party.

The NDP’s Andrea Horwath also responded to the allegations, calling them a “stinking mess” and calling on Ford to explain who paid for memberships.

“Uncertainty is the enemy of investment”

This week on Beyond the Ballot, Rocco Rossi of the Ontario Chamber of Commerce sat down with Tom Clark to talk about Ontario’s business community and the upcoming election. Watch below. 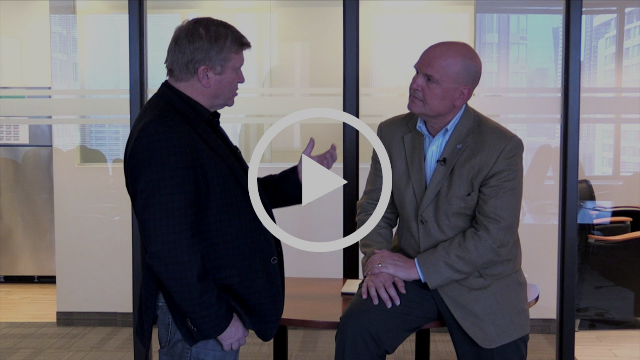 Our Chairman Tom Clark is moderating a post-election panel on June 18 with key strategists from the provincial campaign. Hosted by the Empire Club of Canada, Tom will do a deep dive with Liberal strategist Omar Khan, Ford campaign director Michael Diamond and long-time NDPer Brian Topp