“On June 7th voters will elect a new government. I don’t know who voters will choose, but I am pretty sure that it won’t be me.”

Following Saturday morning’s admission of defeat, Premier Wynne’s campaign focus has turned from broader provincial issues to shoring up support for key local candidates as the governing party prepares for relegation to third party standing. After the shocking admission of defeat on Saturday, Wynne spent the rest of the weekend in the GTA, canvassing her own riding of Don Valley West on Sunday afternoon. Wynne will focus the attention of the Liberal campaign effort on strategic GTA ridings as the party will fight to make the 8-seat minimum needed for official party status.Doug Ford returned to northern Ontario over the weekend with stops in Thunder Bay, Sault Ste. Marie and James Bay before heading back to Ottawa and Kingston. Today, Ford will be in the GTA riding of Scarborough. Ford will concentrate efforts in the GTA before heading to Caledonia for his election eve rally June 6th. Andrea Horwath seems to have been energized by the Premier’s comments on Saturday and has made campaign stops in St. Catharines, Mississauga, Don Valley, Peterborough and Toronto where the NDP leader held a rally Sunday attended by approximately 1,200 supporters.  Today, Horwath will host five campaign events in southwestern Ontario including London, Sarnia, Chatham, Leamington and St. Thomas. 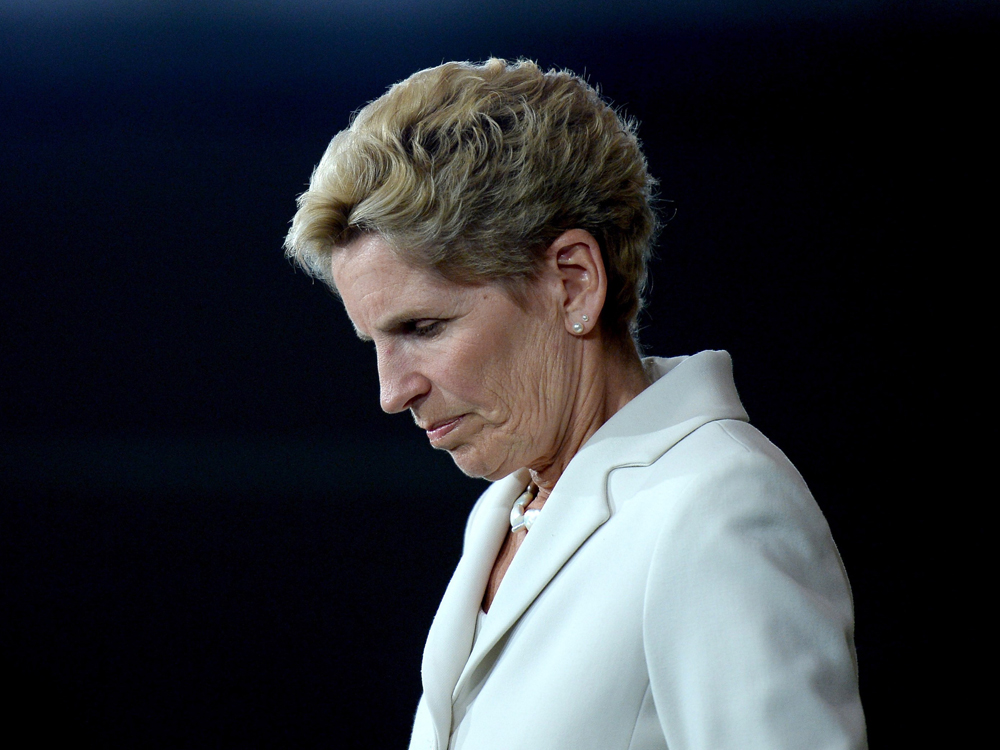 “On June 7th voters will elect a new government. I don’t know who voters will choose, but I am pretty sure that it won’t be me. After Thursday, I will no longer be Ontario’s premier. And I’m okay with that,” Wynne said. In a campaign full of surprises, Saturday morning saw Kathleen Wynne acknowledging her party would not be the winner in Thursday’s election. Wynne made the rare announcement with six days left in the campaign at an elementary school in north Toronto. During the emotional announcement, Wynne asked voters to still vote Liberal and to elect enough Liberal candidates to stop an NDP or PC majority government at Queen’s Park. Wynne explained, “A vote for the Liberal party is a vote to keep the next government in check, a vote for the Liberal party is your best bet to make sure that the next government is not a majority government and the next government is thereby held to account for all voters.” This is a desperate move for the Liberal Party to salvage seats. Wynne continued campaigning over the weekend and spent time canvassing in her own riding of Don Valley West showing how serious the situation is for the Liberals.  A similar situation took place in BC in 2001 when NDP Premier Ujjal Dosanjh conceded ahead of the election; he ended up losing his own seat and the NDP only secured two seats.

The surprise announcement caught some Liberals off guard. Wynne held a quick morning conference call to inform candidates of the plan but some MPPs found out via social media. One Liberal candidate said the premier’s announcement ‘unburdens’ voters in his riding who want to vote Liberal but dislike Wynne and one said it will help in a close race with the NDP.PC reaction
Ford did not have much to say when asked about Wynne’s announcement. He said the election is about “change” and his team is focused on their messages.

Horwath criticized Wynne for “playing a dangerous game” asking Ontarians to strategically vote for a minority government. Horwath said she was disappointed with Wynne’s decision to concede: “Kathleen Wynne has abandoned the fight against Doug Ford cuts. And her request today for a minority government is a demand that she be allowed to continue to hold the power at Queen’s Park – something voters have already rejected.” 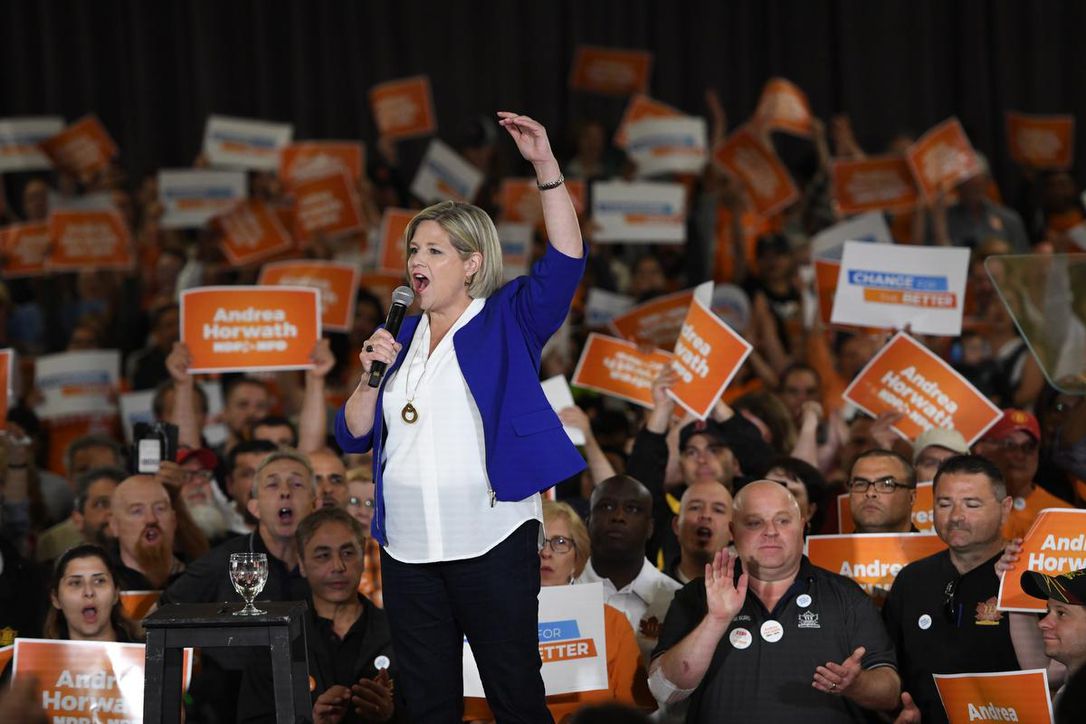 Andrea Horwath hosts ‘Change for the Better’ Rally in Toronto

On the last Sunday before the election, NDP Leader Andrea Horwath hosted a ‘Change for the Better’ Rally in the Liberal-held riding of Spadina—Fort York. With an estimated 1,200 people in attendance, Horwath vowed that she would not work with the Liberals in the event her party is granted a minority government. “People have rejected Kathleen Wynne and the Liberals,” Horwath stated at the rally. “It is apparent. Even Kathleen Wynne is not supporting Kathleen Wynne this time around by the looks of it.”Elaborating on her motivation for the move, Horwath declared, “The Liberals have supported privatization, they have sold off our public assets, they’ve cut our hospitals. Any party that does that is not a party I can work with.” As the focus of the Liberal Party shifts to maintaining its official party status in the legislature, Horwath’s NDP will spend the remaining days before June 7 in Conservative strongholds; attempting to challenge Tory incumbents. 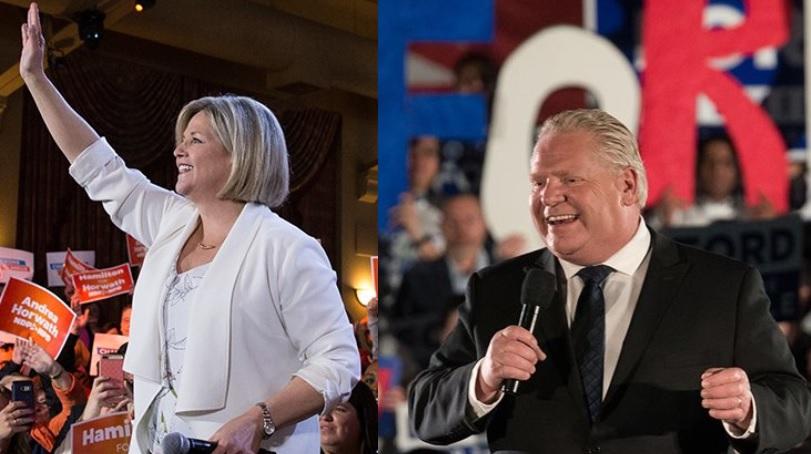 What are the polls saying?

Over the weekend we have seen a slight change in the polls likely due to Liberal Leader Kathleen Wynne conceding that she will not be Premier on June 7. A poll by Abacus Data has the NDP with a 4-point lead (37%) over Doug Ford and the PCs (33%) while the Liberals remain in a distant third with 23%. A poll by Maclean’s-Pollara released yesterday has the NDP and PCs in lockstep heading into the election each at 37% and Liberals at 20%. This suggests that the Liberals will be in a distant third in most ridings across the province on election day which may translate to a single-digit seat count or even worse: loss of official party status which requires an 8-seat minimum in Ontario. CBC also shows PCs and NDP virtually tied with a difference of 1%. As of yesterday, the CBC Poll Tracker has Horwath and the NDP at 37%, PCs at 36% and Liberals at 20%. What does this say about the next four days? Nothing. All we know is that we will have a new Premier. Over the next four days, voters will be watching each campaign closely to determine who will win their vote on June 7.

Over the next four days leading up to June 7, each campaign will have a different focus in the hopes to get their candidates over the finish line. Liberal candidates are focused on keeping their seats, especially incumbents like former Finance Minister Charles Sousa in Mississauga South, Steven Del Duca in Vaughan and Michael Coteau in Don Valley East to name a few. Kathleen Wynne is pleading voters to vote for their local candidates to keep a check and balance on the future NDP or PC government. The NDP and PC campaigns will spend the next few days focused on each other. New attack ads from each party have already been released over the weekend. Ford will continue to promote his experienced candidate roster bringing Christine Elliott and Caroline Mulroney to a number of campaign stops trying to appeal to female voters. Andrea Horwath is focused on her campaign slogan “change for the better” reminding voters that change is on the way and the NDP is the only government who can bring it to the province.

Below is a tally of which media outlets across Ontario have endorsed parties ahead of Thursday’s election. 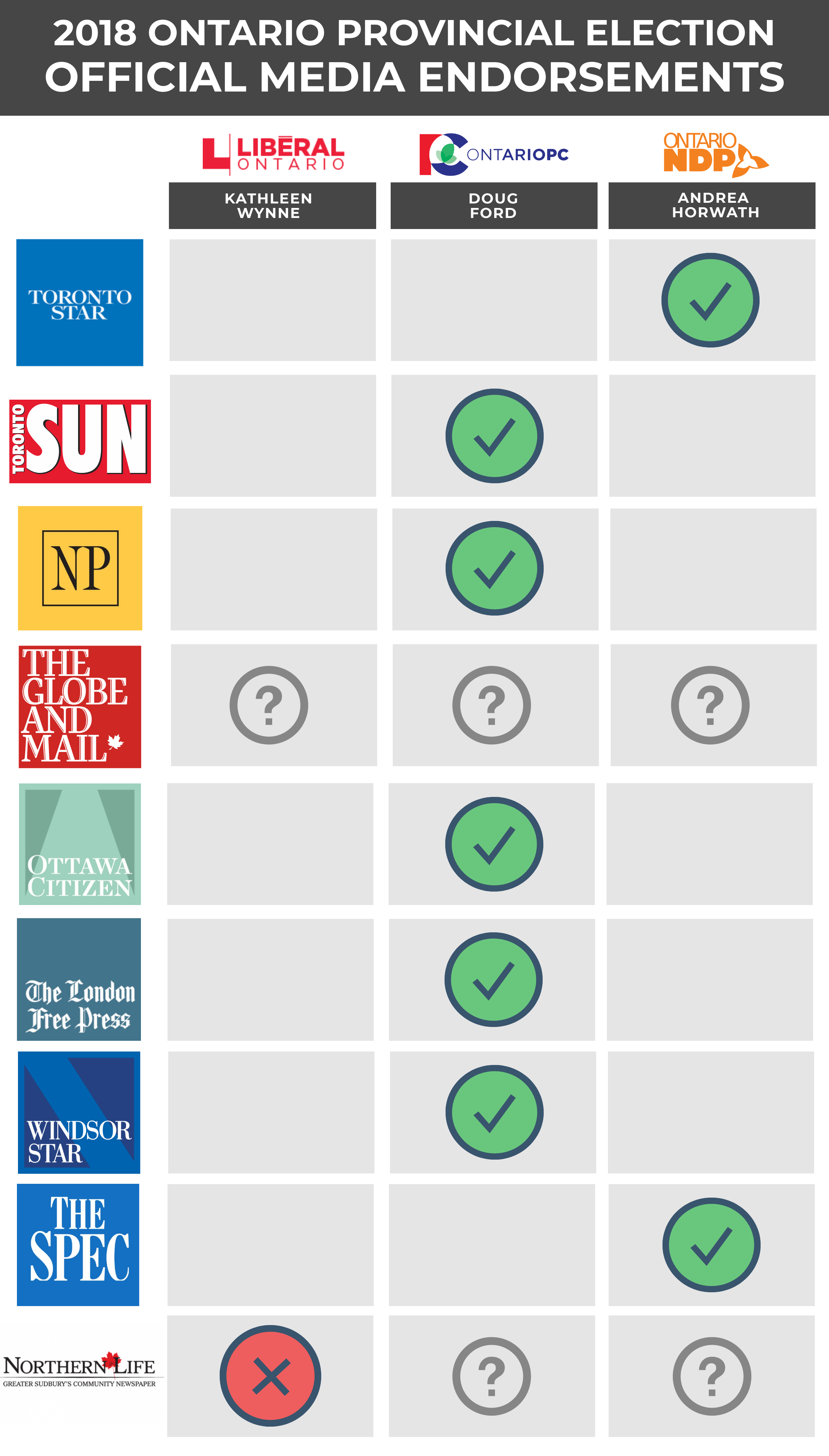